Adversity – an all too familiar expression in our nations mining industry, particularly when analysing the past five years of commodity prices across Australian export.

The boom hit in the 2000’s, bringing a sharp spike in our nations economy. With an increase of more than 300% in global prices for Australia’s resource exports (in US Dollar) between 2003-2011, in comparison to the previous boom of the 70’s. Read more here

Unfortunately, the glory days hit a major holt in the road, with the mining downturn of 2011 whereby it’s effects were felt subsequently overnight causing the Australian resource sector to go bust and self implode.

Global economists predicted 2018 as the year the Phoenix would rise from the ashes, so to speak, and the Australian Resources industry would commence a steady climb in commodity prices – and therefore the 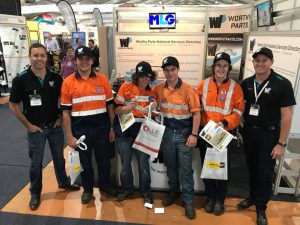 economic contribution from the industry would approach similar figures as we saw as normality in the 2000’s.

Queensland Mining and Engineering Exhibition of 2018 marked the largest mining event in the state at the forefront of the of the new era of mining.

The three-day expo that took place at the Mackay Showgrounds in the last week of July produced a hype felt across the entire pavilion.

You might as well have said that QME targeted three MAJOR points that would be responsible for the return of growth in the industry. 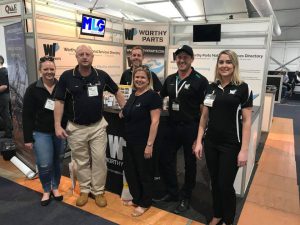 This year’s expo featured digital technologies and engineering solutions that would aid in the industry’s ability to minimise expenditure and maximise growth in a steady environment.

With stalls from businesses based in the Pilbara, WA, through to the Bowen Basin, QLD, the event played host to the mutual feeling of positivity and growth as well as firm handshakes.

Over the three day period, QME experienced an estimated audience of 4500 people who busily marched the hallways addressing relevant stalls equipped to adapt to the clients needs, an estimated increase of 18% in comparison to 2016.

Mackay as a region benefited from the increase in local economic on-flow from the event.

For Worthy Parts, 2018 was the  third time the team have attended the expo, with the team heavily focusing on the online opportunities that both our clients and Service Providers would benefit from. 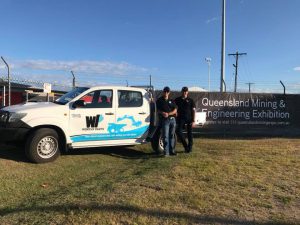 A successful 72 hours allowed the team to discuss strategies with new clients based on the opportunities of advertising in mining.

Connecting the industry across all states and regions is at the forefront of our purpose, enabling Service Providers to connect and transact in business together, facilitated by the directory.

As we watch the industry propel itself out of the downturn, businesses have learnt to adapt and excel in technologies and focus on a steady growth, verse the spike we all know too well.

QME paved the way for new business ventures in the industry and it was certainly an atmosphere not to be missed as they’re set to return in the peak of our market in 2020.